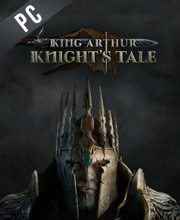 It's a digital key that allows you to download King Arthur Knight’s Tale directly to PC from the official Platforms.

How can I find the best prices for King Arthur Knight’s Tale CD keys?

Allkeyshop.com compares the cheapest prices of King Arthur Knight’s Tale on the digital downloads market to find the best sales and discount codes on trusted stores.

King Arthur Knight’s Tale is a turn-based CRPG developed by NeocoreGames, a modern dark fantasy retelling of the classic stories of Arthurian mythology with a twist on the traditional tales of chivalry. You are the dreaded Sir Mordred rival of king Arthur and the former black knight of legend, in a fierce battle between you and King Arthur both of you managed to fatally wound the other. Yet you wake up, the lady of the lake had brought you back for a mission to end King Arthur once again, or whatever nightmare he has become.

EU STEAM CD KEY: Requires an EUROPEAN IP address or you must activate it with a VPN (Virtual Private Network) in order to play King Arthur Knights Tale. Might have languages restrictions or language packs. Read the description on the store game page to know if the EU IP is only needed for activation or for playing also (maybe on EU Servers). Most of the stores offer you their help, or show you how to do this with a tutorial to follow.
EUROPEAN STEAM GIFT : It’s a steam gift for Europe which requires an European IP address to activate and to play King Arthur Knights Tale on Steam. Read carefully the store description about region and language restrictions.
STEAM GIFT : A Steam gift is a one-time transfer you receive. You activate and install King Arthur Knights Tale to play on Steam, it is a non-refundable game that stays in your Steam games collection. Please read the store description about any language or region restrictions.
STEAM CD KEY : Use the Steam Key Code on Steam Platform to download and play King Arthur Knights Tale. You must login to your Steam Account or create one for free. Download the (Steam Client HERE). Then once you login, click Add a Game (located in the bottom Left corner) -> Activate a Product on Steam. There type in your CD Key and the game will be activated and added to your Steam account game library.
Early Access