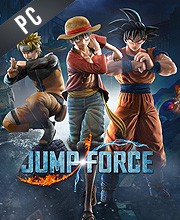 What is Jump Force CD key?

It's a digital key that allows you to download Jump Force directly to PC from the official Platforms.

How can I find the best prices for Jump Force CD keys?

Jump Force is an action, anime, fighting video game that is developed by Spike Chunsoft and published by Bandai Namco Entertainment.

To celebrate the 50th anniversary of the very popular Jump Magazine, the most famous Manga Heroes will come to one battleground and fight with the most dangerous threat.

Jump Force offers a unique setting that merges the Jump World as well as the Real World. The graphics used for the Manga characters are amazing that it brings them to life like never before.

Introducing to you some of the characters that you will get to play in Jump Force:

STEAM EMEA KEY : What is Steam Key EMEA signification? EMEA means for Europe, Middle East and Africa and several other countries. Please read the store description about country and language restrictions to know which are concerned. Use the key to Download and play Jump Force on Steam.
EU STEAM CD KEY: Requires an EUROPEAN IP address or you must activate it with a VPN (Virtual Private Network) in order to play Jump Force. Might have languages restrictions or language packs. Read the description on the store game page to know if the EU IP is only needed for activation or for playing also (maybe on EU Servers). Most of the stores offer you their help, or show you how to do this with a tutorial to follow.
EUROPEAN STEAM GIFT : It’s a steam gift for Europe which requires an European IP address to activate and to play Jump Force on Steam. Read carefully the store description about region and language restrictions.
STEAM GIFT : A Steam gift is a one-time transfer you receive. You activate and install Jump Force to play on Steam, it is a non-refundable game that stays in your Steam games collection. Please read the store description about any language or region restrictions.
STEAM CD KEY : Use the Steam Key Code on Steam Platform to download and play Jump Force. You must login to your Steam Account or create one for free. Download the (Steam Client HERE). Then once you login, click Add a Game (located in the bottom Left corner) -> Activate a Product on Steam. There type in your CD Key and the game will be activated and added to your Steam account game library.
STEAM KEY ROW : It means for Rest Of the World countries which are not concerned by the region restrictions. This product can't be purchased and activated in Several countries. Please read the store description to know the full list of countries which are concerned. Use the key to Download and play Jump Force on Steam.
Deluxe Edition
Preorder bonus
Standard Edition
Ultimate Edition

One of the worst fighting games I’ve ever tried, with unremarkable gameplay.

Characters in animations in 95% of cases only move their lips, and worst of all, they do it pretty badly.

Immediately after the release, Jump Force encountered a couple of criticisms of a technical nature that angered some players.

All the best anime characters in one game? Sign me up!