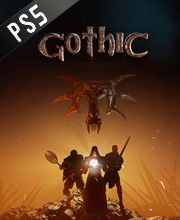 What is Gothic Remake Game Code?

It's a digital key that allows you to download Gothic Remake directly to Playstation 5 from PSN (PlayStation Network).

How can I find the best prices for Gothic Remake on Playstation 5 ?

Allkeyshop.com compares the cheapest prices of Gothic Remake on the digital downloads market to find the best sales and discount codes on trusted stores.

Gothic Remake is an action-adventure RPG made by Alkimia Interactive, as the title suggests is a remake of the classic Gothic 1 made in 2001 a landmark classic of the RPG genre. You are Imprisoned for an unknown crime, sent to a labor prison camp owned by the kingdom of Myrtana sealed in shut by powerful magics by the monarchs’ best mages, but as you have ushered inside a mutiny inside the prison camp caused the magic that was supposed to seal the prisoners inside the mine has gone awry, with the king’s hands tied with the orc invasion, the ore inside the mine has become invaluable he, capitulates and is forced to make a deal with the leaders the prison its most violent prisoners, but what they don’t know is that you’re in the prison arrival will change absolutely everything.