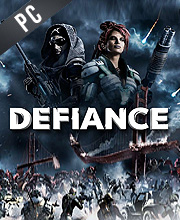 What is Defiance CD key?

It's a digital key that allows you to download Defiance directly to PC from the official Platforms.

How can I find the best prices for Defiance CD keys?

Allkeyshop.com compares the cheapest prices of Defiance on the digital downloads market to find the best sales and discount codes on trusted stores.

Defiance is an open-world action shooter MMORPG developed and published by Trion Worlds, Inc. The game takes place in a futuristic and transformed version of the San Francisco Bay Area where players can hunt alone, or with other players in order to take on missions and events, improve skills, and eventually level up.

Players can choose to play between two characters: aliens and humans. Each character’s appearance can be customized. As you hunt and compete with other players for alien technology, your character levels up and allows you to unlock powerful weapons that will definitely help you in future battles.

A multitude of armors, weapons, and special abilities are available for you in-game, so there is definitely a limitless amount of gameplay and warfare for players and fans of the game. Quests can be taken on alone, but there are also missions that can be taken with other players online.

With dynamic events aside from missions, co-op and multiplayer, Defiance is truly an MMORPG like no other. Enter the vast world of Defiance today and see yourself get immersed right away.

PUBLISHER WEBSITE CD KEY: Use the CD Key Code to download directly on the Official Website or from the store to play Defiance. Follow the instructions given by the store. Verify languages available and possible region restrictions before buying.
STEAM CD KEY : Use the Steam Key Code on Steam Platform to download and play Defiance. You must login to your Steam Account or create one for free. Download the (Steam Client HERE). Then once you login, click Add a Game (located in the bottom Left corner) -> Activate a Product on Steam. There type in your CD Key and the game will be activated and added to your Steam account game library.
Deluxe Edition
Limited Edition
Standard Edition

I dont recommend this.