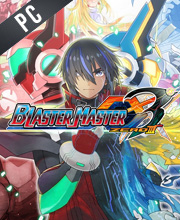 It's a digital key that allows you to download Blaster Master Zero 3 directly to PC from the official Platforms.

How can I find the best prices for Blaster Master Zero 3 CD keys?

Allkeyshop.com compares the cheapest prices of Blaster Master Zero 3 on the digital downloads market to find the best sales and discount codes on trusted stores.

Blaster Master Zero 3 is an old-school style Metroidvania developed by Inti Creates, the 3rd game of Blaster Master Zero, a reboot series of the original 1988 games from the Blaster Master franchise. Blaster Master Zero 3 serves as the finale of Jason’s saga and a direct continuation of the second game, lead series protagonist Jason as he tries to find and rescue the kidnapped Eve and Fred after they got attacked by Sophia’s forces. Jump into G-SOPHIA SV once again and stop at nothing to find her.

EPIC GAMES KEY : Region Free / Worldwide. Requires Epic Games Launcher App in order to play the game. You need to create a free account here in order to download Blaster Master Zero 3 from Epic Plateform . Read the description on the store page about any language or country restrictions.
EUROPEAN STEAM GIFT : It’s a steam gift for Europe which requires an European IP address to activate and to play Blaster Master Zero 3 on Steam. Read carefully the store description about region and language restrictions.
STEAM GIFT : A Steam gift is a one-time transfer you receive. You activate and install Blaster Master Zero 3 to play on Steam, it is a non-refundable game that stays in your Steam games collection. Please read the store description about any language or region restrictions.
STEAM CD KEY : Use the Steam Key Code on Steam Platform to download and play Blaster Master Zero 3. You must login to your Steam Account or create one for free. Download the (Steam Client HERE). Then once you login, click Add a Game (located in the bottom Left corner) -> Activate a Product on Steam. There type in your CD Key and the game will be activated and added to your Steam account game library.
Standard Edition