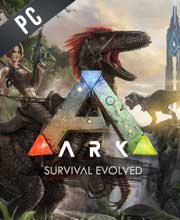 It's a digital key that allows you to download ARK Survival Evolved directly to PC from the official Platforms.

How can I find the best prices for ARK Survival Evolved CD keys?

Allkeyshop.com compares the cheapest prices of ARK Survival Evolved on the digital downloads market to find the best sales and discount codes on trusted stores.

Play the role of a stranded human. Naked, freezing, and starving on the island of ARK, you must hunt, craft items, research technologies, or build shelters in order to survive. Team up with other players, or even prey on them – the choice is yours.

For the past two years, ARK has been helping to shape the genre and now that it’s “finished,” it feels like the genre is due for the next stage of evolution.

Explorer’s Edition comes with the base game with 3 huge expansion packs which are the Scorched Earth, Aberration, and Extinction Expansion Pack. All in all 900 hours of gameplay.

Scorched Earth comes with a new location with unique desert-themed biomes which are the dunes, high desert, mountains, canyons, badlands, and oasis. The new location also comes with new creatures, new items and new challenges like a new deadly boss called the Manticore.

Aberration sets players up in a damaged ARK where the atmosphere has been destroyed, this resulted in harsh radiation and biomes surviving underground. Everything in this ARK is malfunctioning, resulting in a lot of hazards, new creatures, 50+ new craftable items to use in the new environment and 5 new major biomes.

Extinction is where the story begins and ends. Play as a veteran survivor and face the ultimate challenge which is the huge roaming Titans that dominate the planet Earth. The once-thriving planet is now desolate and corrupt. Discover a new landscape with the ruins of the past civilizations and discover what the true purpose of the ARK network was.

Genesis: Part 1 presents a unique challenge which is a virtual simulation. You must survive all the challenges with your in-game robotic companion called HLN-A. Conquer all the simulation tests and uncover the secrets of the threatening landscape. You must explore, build, tame and fight to survive.

The Center includes a massive map making the current map about 70 sq. kilometers. Includes the Center which complements the current ARK biomes. This includes ice caves, picturesque mountains, lava rivers and so much more.

Ragnarok offers the ultimate survivor experience with an expansive 144 sq. kilometer environment. Here, all the biomes plus those of The Island and Scorched Earth are combined. This also comes with new creatures like Ice Wyverns, Polar Bears, and a mystical creature. There are also some unique features to look forward to.

Valguero is a diverse 63 km map that comes with an explorable new land and sea. Includes 8 biomes, a boss arena, the Deinonychus, a huge network of caves, scattered ruins and the Valguero survivors.

EPIC GAMES KEY : Region Free / Worldwide. Requires Epic Games Launcher App in order to play the game. You need to create a free account here in order to download ARK Survival Evolved from Epic Plateform . Read the description on the store page about any language or country restrictions.
EU STEAM CD KEY: Requires an EUROPEAN IP address or you must activate it with a VPN (Virtual Private Network) in order to play ARK Survival Evolved. Might have languages restrictions or language packs. Read the description on the store game page to know if the EU IP is only needed for activation or for playing also (maybe on EU Servers). Most of the stores offer you their help, or show you how to do this with a tutorial to follow.
EUROPEAN STEAM GIFT : It’s a steam gift for Europe which requires an European IP address to activate and to play ARK Survival Evolved on Steam. Read carefully the store description about region and language restrictions.
STEAM GIFT : A Steam gift is a one-time transfer you receive. You activate and install ARK Survival Evolved to play on Steam, it is a non-refundable game that stays in your Steam games collection. Please read the store description about any language or region restrictions.
STEAM GIFT ROW : This a steam gift for ROW regions. It means for Rest Of the World. This product can't be purchased and activated in Several countries. Please read the store description to know the full list of countries which are concerned.
STEAM CD KEY : Use the Steam Key Code on Steam Platform to download and play ARK Survival Evolved. You must login to your Steam Account or create one for free. Download the (Steam Client HERE). Then once you login, click Add a Game (located in the bottom Left corner) -> Activate a Product on Steam. There type in your CD Key and the game will be activated and added to your Steam account game library.
Windows 10 EU : This is an EUROPEAN Microsoft code to play on PC for EUROPE ONLY. You need to have installed Windows 10 Anniversary Edition update on your PC. Log into your Microsoft account to download and play. Read closely the description given by the store to activate your game.
PC Win 10 / Xbox Key. Digital code which allows you to play on both Xbox and Windows 10 PC. See below for more informations.
DLC
Explorer Edition
Standard Edition
Ultimate Edition
Compare Choose & Buy Download (710)

great game made better now wildcard have made it free for everyone on pc. ragarok is my fav map of all times. cause of one thing: GRIFFINS!

Really great game, have played a bit through the account of my friend and would buy it for my own steam if the prices drop again ^^

It’s the best game to build a house with arc survival games and to burn dinosaurs. pvp. pv. It’s a game that you can choose whatever you want

I got this game for cheap after comparing the prices.
10/10 would save money again