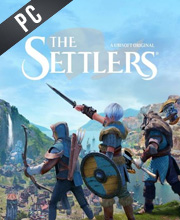 What is The Settlers CD key?

It's a digital key that allows you to download The Settlers directly to PC from the official Platforms.

How can I find the best prices for The Settlers CD keys?

Allkeyshop.com compares the cheapest prices of The Settlers on the digital downloads market to find the best sales and discount codes on trusted stores.

The Settlers is a city builder/real-time strategy game built on 30 years of Settlers legacy, developed by Germany-based Blue Byte studios. This new entry to the series combines the in-depth city management, deep infrastructure, and economy gameplay the franchise is known for and real-time strategic battles to ultimately defeat opponents reminiscent of modern strategy games. Choose from 3 unique factions, each with its own unique quirks and specialties.

This Edition of The Settlers contains the base game plus several bonus items for buying the game before the official release date.

This Edition of The Settlers contains the base game plus the Deluxe Edition pack which contains a plethora of in-game items, digital accessories, and cosmetic items and the explores pack.