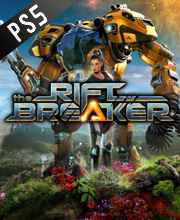 It's a digital key that allows you to download The Riftbreaker directly to Playstation 5 from PSN (PlayStation Network).

How can I find the best prices for The Riftbreaker on Playstation 5 ?

The Riftbreaker is one of the most rewarding games that I’ve ever played. With that in mind, that sense of accomplishment will come after many stressful moments and heartbreaking failures which could have been alleviated with some more intuitive mechanics.

The Riftbreaker is a genuine challenge throughout. The world is beautiful and the campaign is superb.