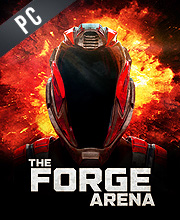 What is The Forge Arena CD key?

It's a digital key that allows you to download The Forge Arena directly to PC from the official Platforms.

How can I find the best prices for The Forge Arena CD keys?

Allkeyshop.com compares the cheapest prices of The Forge Arena on the digital downloads market to find the best sales and discount codes on trusted stores.

The Forge Arena is a tactical arena first-person shooter that is developed by Freezing Raccoon and published by Minacov.

Get to play with up to 24 simultaneous players in such an action-packed arena. Offering a competitive game mode that every player will surely enjoy. This mode offers a two-phase round, here both teams would have to gather points by completing some objectives. The mode’s first phase would be for the two teams to battle it out in order to capture the orb that is placed in the middle of the arena. In the second phase, the team that was able to capture the orb would automatically become the aggressors and the game will turn into a typical bombsite scenario.

Aside from that, the game also offers a 5 vs 5 competitive experience with unique weapons. You can make your weapons more unique with the 100 customizable weapons as well as skins. Get to collect them and trade them in the marketplace. The marketplace won’t be just like any other marketplace, it is world class and intuitive and is brought to us by OP Skin Co-founder, Artur Minacov.

Fight with an edge by managing your economy as well as make good decisions on the weapons that you will equip.