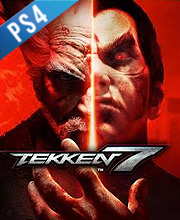 What is Tekken 7 Game Code?

It's a digital key that allows you to download Tekken 7 directly to Playstation 4 from PSN (Playstation network).

Allkeyshop.com compares the cheapest prices of Tekken 7 on the digital downloads market to find the best sales and discount codes on trusted stores.

Witness the explosive finale to the father and son feud that is yet to turn the world upside down again.

At its core, Tekken 7 is the ultimate Tekken experience. While paying tribute to previous games in the series, it’s also made for the hardcore Tekken fan in mind. Newcomers will also love it once you get a feel for the unique fight system.

The most important aspect of the game is the way movements flow from one character to another, allowing for unbroken sequences that can be both long and spectacular. It’s what makes Tekken unique and not only that it’s present, but it has been greatly enhanced.

Tekken 7 is a hallmark fighting game that’s both accessible and highly technical, with great customization options.

The Day 1 Edition bundles the base game with the Eliza DLC character.

The Ultimate Edition bundles the base game with both Season 1 and Season 2 Passes, plus the Eliza DLC character. You also get the Taiko No Tatsujin customization pack and the Artist Collaboration Character Panel Set.

The Collector’s Edition bundles the base game with the Eliza DLC character, plus the following physical collectibles:

The Collector’s Edition bundles the base game with Season Pass 1, plus the following physical collectibles:

The Season Pass adds the following:

The Season 2 Pass adds the following:

The Season 3 Pass adds the following:

This adds Eliza, a vampire who first appeared in the Tekken Revolution free-to-play spin-off, as a playable character.

Note: Eliza is not part of any of the Season Passes.

TEKKEN 7 DLC19 Island Paradise brings a wide beachside stage. This comes with both a stunning beach with crystal clear water as well as a high-class resort-type pool.

Find all the best prices for Tekken 7 DLCs on Allkeyshop!

PLAYSTATION ACCOUNT : You will receive a Playstation account to download and play Tekken 7 PS4. Once downloaded you can play with your own account. Follow the instructions given by the seller and read carefully the store description about any language and region restrictions.
EUROPEAN BOX GAME : This is an European version for Tekken 7 PS4 in Box Edition (DVD-CD ROM). This is not a downloadable product. Please read the sellers page for any additional costs (taxes, shipping), delivery time for your country and languages available.
PLAYSTATION CODE : This a Playstation Game Code to download Tekken 7 PS4. Activate the code on the Playstation Network. Read carefully the store description about any language and region restrictions.
PLAYSTATION NETWORK USA : PSN Code for USA ONLY. You need an US PSN Account to add USD in your Virtual Wallet. Login to your Playstation Account, use the PSN Card Code (12 digit code) to add funds in PSN Wallet in your country currency USD / Dollar US / $ only. To add money on Playstation Network wallet you need the following components and services:
* PS4 / PS3 / PSP / PSVITA Console
* A broadband internet connection
* US Playstation Account
* A free Playstation Wallet
You can follow the store description on how to add currency on the PSN Account for more informations.
Deluxe Edition
Standard Edition
Ultimate Edition

I’m confused on how to digitally download a game.Could someone please help me?

Hello Zaynab, you can download and install your digital games from your order confirmation screen or Your Games Library.