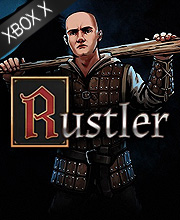 What is Rustler Game Code?

It's a digital key that allows you to download Rustler directly to Xbox Series X from Xbox Live.

How can I find the best prices for Rustler on Xbox Series X ?

Allkeyshop.com compares the cheapest prices of Rustler on the digital downloads market to find the best sales and discount codes on trusted stores.

Rustler is a top-down open-world action RPG an irreverent medieval recreation of old-school retro GTA of the ’90s. You play as an unnamed lowly and drunken peasant, experience feudalism at its worst the daily life of serfs, religious Inquisitions, and witch-hunting. Take revenge on the nobles and join the Grand tournament, ride horses and take part in jousting competitions, beat up valiant and stupid knights in their own game, use melee weapons or automatic crossbows. Complete the main questline or get sidetracked in a variety of humorous missions and quests or just simply bring as much havoc as possible.

All in all, though, this is a fun if forgettable medieval romp: much of the appeal stems from seeing how GTA series staples have been adapted, like the Pimp-a-Horse drive-thrus which clear your Wanted level and the end of mission beats that accompany each quest you complete.

For all of its issues, Rustler is a fun little game that tries something a bit different, recapturing a long-lost element of game design and adding a fun new twist. Its humorous and satirical elements help keep it light-hearted, and though it occasionally has some comedic misses, it’s also full of genuinely laugh-out-loud moments.