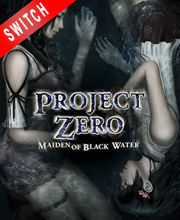 It's a digital key that allows you to download PROJECT ZERO MAIDEN OF BLACK WATER directly to Nintendo Switch directly from Nintendo eShop.

How can I find the best prices for PROJECT ZERO MAIDEN OF BLACK WATER on Nintendo Switch ?

Project Zero: Maiden of Black Water is so deeply Japanese that you’ll come away from it learning a bit about the wonderful horror storytelling tradition that the culture has. While some might find themselves at odds with a game that is so steadfastly traditional about how a horror game should play. digitallydownloaded.net

The new version of Fatal Frame: Maiden of Black Water comes with improved graphics and some new content, but it would be a game worth playing even without them. Although it’s occasionally more frustrating than scary, the clever gameplay and its dedication to tone and story make it one of the best survival horror games available for the Switch.

NINTENDO CODE : This is a digital code for PROJECT ZERO MAIDEN OF BLACK WATER Nintendo Switch. Use the download code on the Nintendo eShop of your Console. Once connected to the Nintendo eShop, you can enter and redeem the Download Code. Read carefully the store description about any language and region restrictions.
Standard Edition