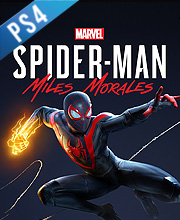 It's a digital key that allows you to download Marvels Spider-Man Miles Morales directly to Playstation 4 from PSN (Playstation network).

Allkeyshop.com compares the cheapest prices of Marvels Spider-Man Miles Morales on the digital downloads market to find the best sales and discount codes on trusted stores.

Save New York as the new Spider-Man hero, Miles Morales. He is not yet familiar with his powers, so he is guided by the original Spider-Man Peter Parker.

That intimacy lends itself perfectly to a story about a vibrant, tight-knit community with a rich and storied history; a story about gentrification and misguided attempts to “fix” things that aren’t broken; a story about a mixed-race kid looking for his place in a world that always seems to see him as “other”, and finding that place in the welcoming, open arms of Harlem.

My only real gripe about Marvel’s Spider-Man: Miles Morales is that I wish there were more of it. Miles and the rest of his circle are absolutely capable of being compelling enough to carry a game for twice the length. I just like this kid, and I think a lot of other people will, too.