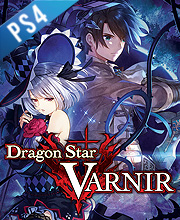 It's a digital key that allows you to download Dragon Star Varnir directly to Playstation 4 from PSN (Playstation network).

Allkeyshop.com compares the cheapest prices of Dragon Star Varnir on the digital downloads market to find the best sales and discount codes on trusted stores.

Dragon Star Varnir is a turn-based JRPG developed by Japanese developers Compile Heart, In the world of Dragon Star Varnir Giant Magical Dragons Terrorize the land with impunity to maintain their dominance dragons curse human children to bear their kin they are branded as witches by other humans, the game follows a knight named Zephyr part of Knights of Requiem a prestigious order that specializes in hunting down these dangerous dragons, and the witches that bore them, but when he is almost killed in one of these missions he was saved by two witches by giving him the dragons curse. Now his once valued comrades hunt him down his only choice is to go with the witches that he once hunted down.

It was a really quite brilliant game. There is fan service in there, and some people will look at that and the anime trappings and not be able to move past it, but underneath this exterior lies a heart that is in many ways the precise opposite of what you might be expecting. It’s almost – dare I say it – feminist in the critique it provides over the way that women are treated in this fairy tale world.

Dragon Star Varnir does what few JRPGs do as it features in-depth party customization as well as a delightful cast of characters. Factor in a boatload of additional content to master and you’re left with a must-have RPG.

US BOX GAME : This is an US import of Dragon Star Varnir PS4 in Box Edition (DVD-CD ROM). This is not a downloadable product. Please read the sellers page for any additional costs (taxes, shipping), delivery time for your country and languages available.
PLAYSTATION CODE : This a Playstation Game Code to download Dragon Star Varnir PS4. Activate the code on the Playstation Network. Read carefully the store description about any language and region restrictions.
Standard Edition