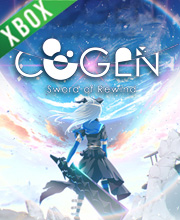 What is COGEN Sword of Rewind Game Code?

It's a digital key that allows you to download COGEN Sword of Rewind directly to Xbox One from Xbox Live.

How can I find the best prices for COGEN Sword of Rewind on Xbox one?

Allkeyshop.com compares the cheapest prices of COGEN Sword of Rewind on the digital downloads market to find the best sales and discount codes on trusted stores.

COGEN Sword of Rewind is a 2D side-scrolling action-platformer with unique time rewinding mechanics developed by Gemdrops, Inc. The story starts as a sentient sword named ExeBreaker found its way into the hands of Kohaku a former resident of Cogen City before all of the devastations that have befallen it occurred. The sword has offered her a bargain to join forces with it to return to her home city and journey to its very heart and find out exactly what really happened to her home.

XBOX ONE GAME CODE : Use the Digital Code received by mail in your Xbox One account to download COGEN Sword of Rewind Xbox One from the Xbox Live. Internet connection is required. Please read the store description about any language or region restrictions.
Standard Edition