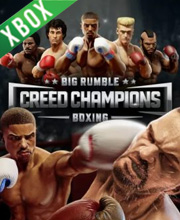 It's a digital key that allows you to download Big Rumble Boxing Creed Champions directly to Xbox One from Xbox Live.

How can I find the best prices for Big Rumble Boxing Creed Champions on Xbox one?

Big Rumble Boxing: Creed Champions is an arcade-style beat-em-up boxing game set in the Rocky and Creed movie franchises developed by Survios Inc., previous developers of a Rocky VR game. Step into the ring and show off your skills Play as any of the iconic characters in the series and climb up the ranks to take on world-class opponents, in the dozens of famous locations, or invite a friend over and challenge him to head-to-head matches in local couch multiplayer.

All in all though Big Rumble Boxing: Creed Champions is a pretty good representation of the Rocky universe. What it isn’t is as in-depth a game as Street Fighter, but it is very arcade-based, perfect for short blasts, and easy to pick up and play for a few rounds.

If you aren’t a huge fan of the films but can get past the egregious decision to only include a sparse amount of playable modes and endure the grind to unlock the other fighters; then Big Rumble Boxing can be a solid and fun fighting game to play.

The Day One Edition includes the base game and a poster