The Best Spooky Games From The Steam Halloween Sale! 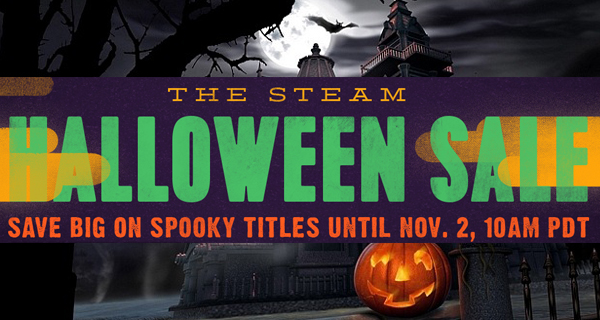 We’ve got the best spooky games for you this Halloween from The Steam Halloween Sale! Also compare prices through our price comparison tool and get these games at the lowest prices yet!

The Steam Halloween Sale runs until November 2, 10AM PDT only!

Compare CD Key Prices
Dying Light is an open-world first person survival horror video game developed by Techland and published by Warner Bros. Interactive Entertainment. This paved the way for the future of survival gaming by introducing features unique to the game.  It features an original and intense story set in an infected city cut off from the outside world. The game is survival of the fittest. In daytime you will be the hunter, but at night dangerous monstrosities awaken, threatening your very life.  All you need to do is survive till dawn. Do you have what it takes?


Left 4 Dead 2 carries the same feeling Left 4 Dead 1 brought but with a new array of weapons, items, maps, and zombies to kill, along with some engine enhancements.  This insanely fun multiplayer zombie FPS game takes you and your friends through the cities, swamps and cemeteries of the Deep South, from Savannah to New Orleans across five new campaigns. They have added 20 new weapons & items accompanied by over 10 melee weapons – axe, chainsaw, frying pan, baseball bat – allow you to get up close and personal with the zombies. New survivors. New story. New dialogue. Certainly a great pick-up for its price.


Killing Floor 2 is the successor to the ridiculously fun and successful original title, that was released in 2009. Our old favorites are back with a vengeance showcasing a whole host of new features, characters, monsters, weapons and story in due course. Killing Floor 2 is most famous for its 6-player co-op Zed-slaughtering mayhem. The graphics are amazing, the gameplay is thrilling, and the different characters and perks keep it interesting. It’s a great game played with friends.


If you are looking for a good post-apocalyptic game that includes a strong building mechanic which keeps you on your toes even when you think you are safe at home, this is the perfect game for you. 7 Days to Die is an open world, voxel-based, sandbox game that is a combination of FPS, Survival, Horror, Tower Defense and RPG. It pairs combat with crafting, looting, exploration and character development. For short, this is pretty much Minecraft for adults. Will you survive the night?


H1Z1 is a zombie survival MMO set in a post-apocalyptic world which offers a sandbox experience. You will enter a world that has been overrun by zombies and you must interact with fellow survivors since the H1Z1 virus outbreak. This game is a unique zombie survival game that lets you craft items, scavenge for supplies and build a fortress to protect yourself from the zombies that have taken over the world.


Zombie army trilogy is for all zombie fans who look forward to play amazing coop game on top of a very fun campaign mode or horde mode.  Expect the unexpected in a high action horror game with incredible atmosphere. The best part of this game are the Nazi undead. You will be facing a legion of undead super soldiers that threaten to conquer the whole of Europe. You can choose to fight alone or team up to save humanity from the zombie menace in this apocalyptic third-person shooter!


The Evil Within is a third-person psychological survival horror video game. The game takes you to a crime scene investigation for a gruesome mass murder. You will take on the role of Detective Sebastian Castellanos and you will be facing a menacing and powerful force. You find yourself in a crazy world where hideous creatures wander among the dead. Faced with unimaginable terror, and fighting for survival, you will go on a journey to unravel that which is behind this evil force.