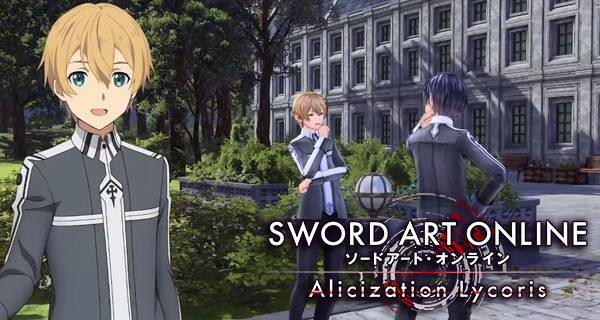 Sword Art Online Alicization Lycoris is set to be an accurate retelling of the anime series. Following Kirito, players will find themselves in the Underworld, a virtual world features in the Alicization storyline from the anime.

The game’s official page at bandainamcoent.com says that the game will be faithful to the original work: “Kirito has awoken in a mysterious yet somehow familiar virtual world where AIs behave like humans. In this world, Kirito meets a young man named Eugeo. They make a promise where their destinies will soon become entwined. To keep that promise and stay together, they must venture onwards.

The trailer shows off the playable characters, Sinon, Leafa, Lisbeth, and Silica, all of who players can recruit as party members during their adventure through the Underworld.

Players love customization options, and included in the trailer are some customizations the players can make, such as to their avatar, armor, clothing, and weapons.

Exploring the Underworld will be a lot of fun for players and during the exploration, you can expect to swim, climb, and jump if you want to progress through the dangers.

The game will feature all the major characters of the series, including Kirito, Eugeo, Alice, and Administrator.

Sword Art Online Alicization Lycoris is set to launch July 10, 2020, and will be available for Xbox One, PlayStation 4, and PC, with the Deluxe Edition including the full game, the Premium Pass with 2 major expansions and a special costume, and 200 SAO coins.