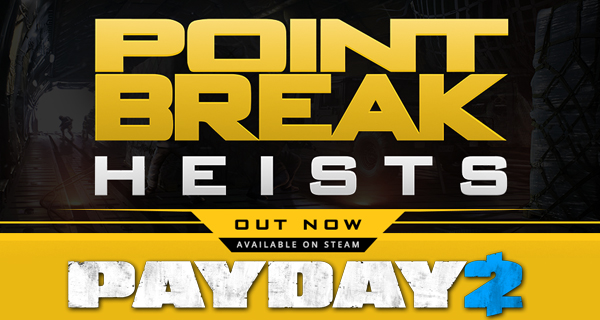 In 2014, Overkill Software released John Wick DLC for Payday 2 that brought the Keanu Reeves action-thriller into the game. This year, the studio decided to release something similar taken after the movie Point Break, the upcoming remake that features Luke Bracey in the role of Johnny Utah.

“Point Break has always been a huge inspiration for the Payday games, so to be able to integrate the film’s characters and storylines into Payday 2 is a dream come true,” says Bo Andersson-Klint, the CEO of Overkill Software. “We previously worked closely with Lionsgate on the successful addition of their character John Wick as a member of the Payday gang, so using that same business model, Lionsgate introduced us to Alcon and Warner Bros. to create two Point Break heists that we believe are some of the best to date.”

Two separate pieces of Point Break DLC are on the way. The Bodhi Character Pack, is free to those who already own Payday 2 and will bring the leader of the Ex-Presidents gang to the game (played in the original by Patrick Swayze and Édgar Ramírez in the 2015 remake) along with a couple of new weapons, perks, and masks.

The Point Break Heists DLC is currently priced at 6.99€ on Steam. It features two brand new heists (Beneath the Mountain Heist and Birth of Sky Heist), 10 new achievements, a new pistol, 4 melee weapons, 6 new songs, and a new contact.

Don’t own a copy of Payday 2 yet? Compare prices and get it at the lowest price!