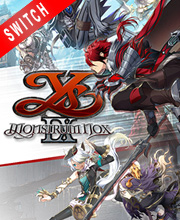 It's a digital key that allows you to download Ys IX Monstrum Nox directly to Nintendo Switch directly from Nintendo eShop.

How can I find the best prices for Ys IX Monstrum Nox on Nintendo Switch ?

Allkeyshop.com compares the cheapest prices of Ys IX Monstrum Nox on the digital downloads market to find the best sales and discount codes on trusted stores.

Ys IX: Monstrum Nox is an action JRPG the 9th game of the long-running Ys Franchise, the series protagonists Adol and his companion Dogi returns to take their adventure to Balduq city but even before they could step inside it Adol is arrested while being imprisoned he meets a mysterious woman named Aprilis who curses him and turns him into a Monstrum a being with supernatural powers and the ability to exorcise monsters. Find and ally with the other Monstrum in the city and defend it from other supernatural threats and find out more about the curse Aprilis puts on you.

Zoom 1m 3m 1y All
Track product
US BOX GAME : This is an US import of Ys IX Monstrum Nox in Box Edition (DVD-CD ROM). This is not a downloadable product. Please read the sellers page for any additional costs (taxes, shipping), delivery time for your country and languages available.
NINTENDO CODE : This is a digital code for Ys IX Monstrum Nox. Use the download code on the Nintendo eShop of your Console. Once connected to the Nintendo eShop, you can enter and redeem the Download Code. Read carefully the store description about any language and region restrictions.
Pact Edition
Standard Edition
Compare Choose & Buy Download (772)