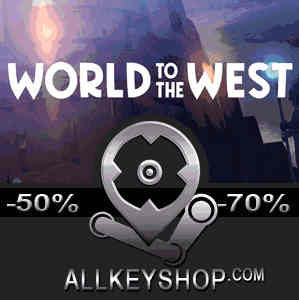 What is World to the West CD key?

It's a digital key that allows you to download World to the West directly to PC from the official Platforms.

How can I find the best prices for World to the West CD keys?

Allkeyshop.com compares the cheapest prices of World to the West on the digital downloads market to find the best sales and discount codes on trusted stores.

World to the West is an action, adventure, role-playing video game developed and published by Rain Games.

Remember the hit Teslagrad? Well, World to the West builds upon the universe of the game. Players will get to choose from four very quirky characters. Lumina the Teslamancer, Knaus the orphan, Miss Teri the Mindbender and Lord Clonington the mustached strongman.

The game is inspired by a European adventure comic. Each of the four characters would have different stories as well as motivations and skills but what they have in common is that they all need to escape the dark shadow of an ancient prophecy.

World to the West features a vibrant world with four amazing characters to choose from. There are puzzles to solve as well as combat to win. And of course, there are a lot of secrets to uncover in the game.

Join our characters as they journey to the World to the West!

GOG.COM CD KEY : You need to register on Gog.com, then use the GOG Key to download and activate your game to play World to the West.
STEAM GIFT : A Steam gift is a one-time transfer you receive. You activate and install World to the West to play on Steam, it is a non-refundable game that stays in your Steam games collection. Please read the store description about any language or region restrictions.
STEAM CD KEY : Use the Steam Key Code on Steam Platform to download and play World to the West. You must login to your Steam Account or create one for free. Download the (Steam Client HERE). Then once you login, click Add a Game (located in the bottom Left corner) -> Activate a Product on Steam. There type in your CD Key and the game will be activated and added to your Steam account game library.
Bundle
Standard Edition

This looks like a funny animation role-playing game. This is the first day you can buy it and it’s already that cheap!!! I think i’m going to buy it!