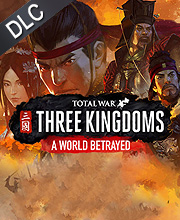 It's a digital key that allows you to download Total War THREE KINGDOMS A World Betrayed directly to PC from the official Platforms.

How can I find the best prices for Total War THREE KINGDOMS A World Betrayed CD keys?

Allkeyshop.com compares the cheapest prices of Total War THREE KINGDOMS A World Betrayed on the digital downloads market to find the best sales and discount codes on trusted stores.

A new generation of warlords are coming into play! Factions from the South will be added which are Lu Bu and Sun Ce. there will be 13 playable factions, new unique battlefields, new legendary characters as well as new story events.