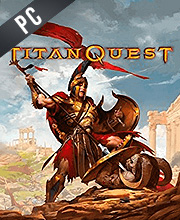 What is Titan Quest CD key?

It's a digital key that allows you to download Titan Quest directly to PC from the official Platforms.

How can I find the best prices for Titan Quest CD keys?

Allkeyshop.com compares the cheapest prices of Titan Quest on the digital downloads market to find the best sales and discount codes on trusted stores.

Set in the ancient worlds of Greece, Egypt, and Asia. Get to play as the hero that the gods seek in order to save the world from the titans who escaped their eternal prison. This epic struggle will determine the fate of both the gods as well as men.

Take control of an avatar that you can personally name, choose the gender as well as the color of your character’s tunic. The world is three-dimensional and is navigated through an overhead third-person view. Your character can be controlled through a point-and-click interface with the use of your mouse.

Get to gather experience points as you defeat enemies as well as complete the quests given by non-player characters (NPCs) that are available all around the area. You can use these to get skills and points that you can apply towards upgrading health and energy levels, dexterity, or strength.

The combat system is hack-and-slash where you can attack randomly generated enemies with the use of a mouse. Weapons available for your character are clubs, swords, axes an staves.

Enjoy Titan Quest in single-player or co-operative multiplayer where you can play with six other players in their game sessions.

GOG.COM CD KEY : You need to register on Gog.com, then use the GOG Key to download and activate your game to play Titan Quest.
ORIGIN CD KEY : Use the Origin Key Code (Electronic Arts - EA) on Origin Platform to download and play Titan Quest. You have to login to your Origin Account or create one for free. Download and install the Origin Software HERE) then you can activate the game on it. Once installed, start Origin, click on the Origin Tab and click on Redeem Product Code and just enter the key. The game will appear in your My games list.
EU STEAM CD KEY: Requires an EUROPEAN IP address or you must activate it with a VPN (Virtual Private Network) in order to play Titan Quest. Might have languages restrictions or language packs. Read the description on the store game page to know if the EU IP is only needed for activation or for playing also (maybe on EU Servers). Most of the stores offer you their help, or show you how to do this with a tutorial to follow.
EUROPEAN STEAM GIFT : It’s a steam gift for Europe which requires an European IP address to activate and to play Titan Quest on Steam. Read carefully the store description about region and language restrictions.
STEAM GIFT : A Steam gift is a one-time transfer you receive. You activate and install Titan Quest to play on Steam, it is a non-refundable game that stays in your Steam games collection. Please read the store description about any language or region restrictions.
STEAM CD KEY : Use the Steam Key Code on Steam Platform to download and play Titan Quest. You must login to your Steam Account or create one for free. Download the (Steam Client HERE). Then once you login, click Add a Game (located in the bottom Left corner) -> Activate a Product on Steam. There type in your CD Key and the game will be activated and added to your Steam account game library.
Anniversary Edition
Anniversary + DLC
Bundle
Gold Edition
Standard Edition

Titan quest is a game about antiquity and confrontation between good and evil. The variety of monsters, clothes and skill branches character, beautiful locations makes it replayable.