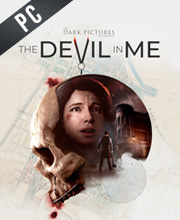 What is The Dark Pictures Anthology The Devil in Me CD key?

It's a digital key that allows you to download The Dark Pictures Anthology The Devil in Me directly to PC from the official Platforms.

How can I find the best prices for The Dark Pictures Anthology The Devil in Me CD keys?

Allkeyshop.com compares the cheapest prices of The Dark Pictures Anthology The Devil in Me on the digital downloads market to find the best sales and discount codes on trusted stores.

The Dark Pictures Anthology: The Devil in Me is a branching cinematic horror game developed by Supermassive Games the studio behind Until Dawn, The Quarry, etc. the fourth game in the series and is considered to be the finale for this season of The Dark Pictures Anthology. A group of documentary filmmakers receives a mysterious call inviting them to an opening of a recreation of the infamous serial killer H.H. Holmes “Murder Castle”. It’s an opportunity that’s too good to pass, and could just be the thing they’re looking for to get some public interest. But things aren’t quite as they seem, the crew discovers they are being watched and even meddled with, suddenly there’s much more at stake than just their views.

With an unsettling atmosphere, gripping tension, and new actions for characters, The Devil in Me is a major improvement for the franchise.

Rarely putting a foot wrong in terms of production and storytelling, we’ve loved every moment we’ve spent with The Devil in Me, an absolutely wonderful conclusion to The Dark Pictures Anthology’s first season. Its story is the most captivating and the most well-realized; so much work has gone into crafting characters and locations, and the sheer goriness will delight and horrify in equal measures.

As the strongest entry yet, Devil in Me is a great finale for Season One of The Dark Pictures Anthology. With an original story and some showstopping sequences, the game is a step up for the series.

This game looks so scary, probably the most terryfing of the series. Great setting and graphics, altough I am not a fan of horror titles.

These games were such a wild ride. So much atmosphere and lore and choices that lead to different outcomes. raemunlai#4990

An absolute try to anyone who already finished the 3 previous chapters.
Can’t wait for the second season to come. Haydehoo! ^^
(CHUCKY#0351)