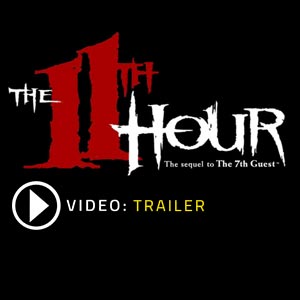 It's a digital key that allows you to download The 11th Hour directly to PC from the official Platforms.

How can I find the best prices for The 11th Hour CD keys?

Allkeyshop.com compares the cheapest prices of The 11th Hour on the digital downloads market to find the best sales and discount codes on trusted stores.

The 11th Hour is an interactive movie puzzle adventure game with a horror setting developed by Trilobyte.

It is the sequel to the 1993 game The 7th Guest. Aside from using a later version of the “Groovie” graphic engine than that used by The 7th Guest, it’s overall similar to its predecessor with the same puzzle-based gameplay, but with the additional element of a treasure hunt.

The story is set 60 years after the events of the first game, and takes place inside the same mansion as The 7th Guest. The game starts when Carl Denning steps into the mansion, with short and vague videos of Robin’s investigation and the clues behind her mysterious disappearance viewed from the gamebook throughout the game.

The gamer will play as Carl Denning, an investigative reporter for the television series “Case Unsolved”, as he sets out on an overwhelming journey in search for Robin Morales, his producer and lover.

Solve puzzle after puzzle in order to go on deeper in the haunted mansion and figure out more of the story. This is the quintessential “so addictive, it’s good” game. Nothing else comes close. By the end you’ll be questioning your sanity, asking yourself why it has come to this and screaming MORE!

PUBLISHER WEBSITE CD KEY: Use the CD Key Code to download directly on the Official Website or from the store to play The 11th Hour. Follow the instructions given by the store. Verify languages available and possible region restrictions before buying.
STEAM GIFT : A Steam gift is a one-time transfer you receive. You activate and install The 11th Hour to play on Steam, it is a non-refundable game that stays in your Steam games collection. Please read the store description about any language or region restrictions.
STEAM CD KEY : Use the Steam Key Code on Steam Platform to download and play The 11th Hour. You must login to your Steam Account or create one for free. Download the (Steam Client HERE). Then once you login, click Add a Game (located in the bottom Left corner) -> Activate a Product on Steam. There type in your CD Key and the game will be activated and added to your Steam account game library.
Bundle
Standard Edition

a nice price on GOG … looks like an indie horror game