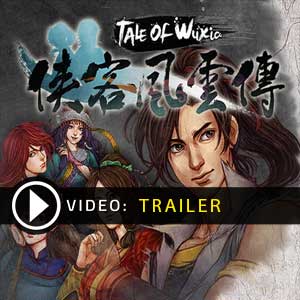 What is Tale of Wuxia CD key?

It's a digital key that allows you to download Tale of Wuxia directly to PC from the official Platforms.

How can I find the best prices for Tale of Wuxia CD keys?

Allkeyshop.com compares the cheapest prices of Tale of Wuxia on the digital downloads market to find the best sales and discount codes on trusted stores.

The tale of Wuxia is a single player role-playing game that has been dedicated in providing the game players with such an intense player defined platform. With this new platform the players will not be restricted to the properties of basic characters but instead you will have the chance to choose what martial arts, talents and personalities a player will have making them more distinctive.

The Wuxia world offers new and interesting stories as well as new maps that has great new systems. In addition to this, there will be more character interactions with the NPCs having their very own emotions. Get to unlock all the hidden stories across the map and find out all of the multiple endings available.

In addition to this, a male character can have a relationship with up to 10 women, which is so much more than the previous version of the game.

STEAM GIFT : A Steam gift is a one-time transfer you receive. You activate and install Tale of Wuxia to play on Steam, it is a non-refundable game that stays in your Steam games collection. Please read the store description about any language or region restrictions.
STEAM CD KEY : Use the Steam Key Code on Steam Platform to download and play Tale of Wuxia. You must login to your Steam Account or create one for free. Download the (Steam Client HERE). Then once you login, click Add a Game (located in the bottom Left corner) -> Activate a Product on Steam. There type in your CD Key and the game will be activated and added to your Steam account game library.
Standard Edition