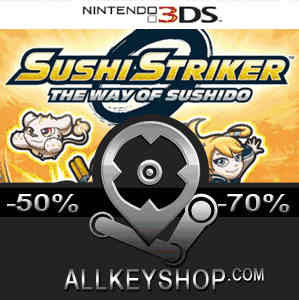 What is Sushi Striker The Way of Sushido Game Code?

It's a digital key that allows you to download Sushi Striker The Way of Sushido directly to Nintendo 3DS directly from Nintendo eShop.

How can I find the best prices for Sushi Striker The Way of Sushido on Nintendo 3DS ?

Allkeyshop.com compares the cheapest prices of Sushi Striker The Way of Sushido on the digital downloads market to find the best sales and discount codes on trusted stores.

Sushi Striker: The Way Of Sushido is an action-puzzle video game that is developed by Nintendo in cooperation with Indiezero and published by Nintendo.

It is a time where sushi had been banned by the ruling empire and the character that you would be playing named Musashi is attempting to lift that ban.

There will be one-on-one battles with AI opponents. Players would have a series of conveyor belts in front of them where sushi would pass through, you must watch the same color sushi plates in order to attack your opponents.

Both you and the opponent will have the same setup where three conveyor belts are in front of you with an extra one for common use. The sushi will pass through these conveyor belts and you would have to match the sushi plates, once matched, Musashi will eat the sushi and the plate will hurl to the opponent to attack them. The one who will have the least amount of life will lose in the game.

The 3DS version of the game allows the player to use the touchscreen in order to match the sushi.