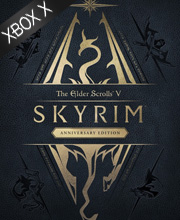 It's a digital key that allows you to download Skyrim Anniversary Edition directly to Xbox Series X from Xbox Live.

How can I find the best prices for Skyrim Anniversary Edition on Xbox Series X ?

It’s hard to believe that Skyrim has been out for ten years now. A game I have nothing but fond memories of no matter which version I have played over those years has been given yet another lease of life with the Anniversary Edition. And these new additions only extend the enjoyment even further.

The Elder Scrolls V: Skyrim – Anniversary Edition is a fun add-on for Skyrim fans. Including plenty of Creation Club content and some new quests will be enough for most players to be happy. Depending on how if you’ve played the game before, the new official DLC is a big reason to upgrade too.