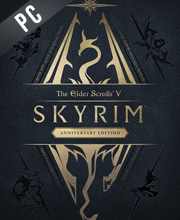 It's a digital key that allows you to download Skyrim Anniversary Edition directly to PC from the official Platforms.

How can I find the best prices for Skyrim Anniversary Edition CD keys?

Despite the little tangent above, I’m thoroughly enjoying my revisit to Skyrim, and am exploring a lot more than I did the first time. The first mod I’ll download will be 21:9 support so I can stop playing with the whole game at the far left of my screen, making me feel like I’m walking sideways with my setup, or having everything stretched and fuzzy but centered. The next will be some nice UHD foilage. Maybe I’ll run around with an AK-47 or learn to fly? Who knows?