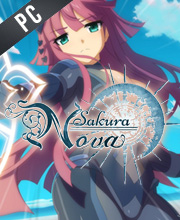 What is Sakura Nova CD key?

It's a digital key that allows you to download Sakura Nova directly to PC from the official Platforms.

How can I find the best prices for Sakura Nova CD keys?

Allkeyshop.com compares the cheapest prices of Sakura Nova on the digital downloads market to find the best sales and discount codes on trusted stores.

Sakura Nova is an adult-themed anime visual novel game developed by British indie developers Winged Cloud, part of the Sakura Series of games, join our three heroines Mikage, Kaguya, and Arisa in a grand adventure filled with action, magic, and humor as you join them and train together with them to become an aspiring knight in a Prestigious academy. In order to pass and become knights of great renown as they promised to be, they must overcome their clashing personalities and learn to work together no matter the situation.

With games like Sakura Nova, it’s obvious that Winged Cloud knows where their bread is buttered. Still, it’s hard to ignore the lack of a compelling story and interesting characters. Mikage is nothing more than an everyday harem dullard, and his relationship with Arisa and Kaguya progresses far too rapidly. They go from awkward meetings in the changing room to best friends to living together in just a few short days. There’s nothing to keep the player engaged, unless, of course, they’re sticking around just to see the naughty pictures.

EU STEAM CD KEY: Requires an EUROPEAN IP address or you must activate it with a VPN (Virtual Private Network) in order to play Sakura Nova. Might have languages restrictions or language packs. Read the description on the store game page to know if the EU IP is only needed for activation or for playing also (maybe on EU Servers). Most of the stores offer you their help, or show you how to do this with a tutorial to follow.
STEAM GIFT : A Steam gift is a one-time transfer you receive. You activate and install Sakura Nova to play on Steam, it is a non-refundable game that stays in your Steam games collection. Please read the store description about any language or region restrictions.
STEAM CD KEY : Use the Steam Key Code on Steam Platform to download and play Sakura Nova. You must login to your Steam Account or create one for free. Download the (Steam Client HERE). Then once you login, click Add a Game (located in the bottom Left corner) -> Activate a Product on Steam. There type in your CD Key and the game will be activated and added to your Steam account game library.
Standard Edition