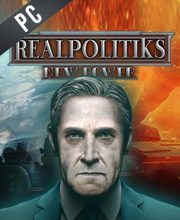 It's a digital key that allows you to download Realpolitiks New Power directly to PC from the official Platforms.

How can I find the best prices for Realpolitiks New Power CD keys?

Allkeyshop.com compares the cheapest prices of Realpolitiks New Power on the digital downloads market to find the best sales and discount codes on trusted stores.

Realpolitiks – New Power DLC is a strategy, video game that is developed by Jujubee S.A. and published by 1C Company. This is a downloadable content, so players would need the base game Realpolitiks to play.

A new power has been added to the game in this new DLC. Included is a mini-scenario where an actual nuclear threat is at hand. The countries involved are USA, China, North Korea and Japan. Choose which country you will play and lead it to victory.

Non-Governmental Organizations are also present that has an influence on the government decisions. These are the forces that are able to navigate the internal affairs of a country like the mafia, religion and so much more. You must balance these powers because of their influence on your country’s internal relations.

Additional options have been added in the international politics like non-aggression pacts that allows a peaceful coexistence with other nations or perhaps political annexation that allows the option to enlarge your territory without using the force of your military.

GOG.COM CD KEY : You need to register on Gog.com, then use the GOG Key to download and activate your game to play Realpolitiks New Power.
STEAM CD KEY : Use the Steam Key Code on Steam Platform to download and play Realpolitiks New Power. You must login to your Steam Account or create one for free. Download the (Steam Client HERE). Then once you login, click Add a Game (located in the bottom Left corner) -> Activate a Product on Steam. There type in your CD Key and the game will be activated and added to your Steam account game library.
PC Win 10 / Xbox Key. Digital code which allows you to play on both Xbox and Windows 10 PC. See below for more informations.
Bundle
DLC