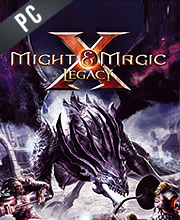 It's a digital key that allows you to download Might & Magic X Legacy directly to PC from the official Platforms.

How can I find the best prices for Might & Magic X Legacy CD keys?

Allkeyshop.com compares the cheapest prices of Might & Magic X Legacy on the digital downloads market to find the best sales and discount codes on trusted stores.

Might & Magic X: Legacy is a role-playing game developed by Limbic Entertainment and published by Ubisoft.

It is the 10th game in the Might and Magic series and is not a sequel to Might and Magic IX. Instead, the game follows the spectacular storyline of Might & Magic Heroes 6 which focuses on events occurring in the Agyn Peninsula of Ashan, on the continent of Thallan, following the war created by the archangel Uriel.

Like the previous titles in the series, the player is given the opportunity to create a party of four characters from among four different races (Humans, Orcs, Elves, and Dwarves) with each race having three classes to pick from, “Might”, “Magic”, and a hybrid class of the two. Competing factions with intent to invade and control the city is on the rise.

You are the city’s last hope to change its unfortunate fate. Lead your group into an action-filled adventure in an exciting world where mythical creatures dwell. Defeat these creatures and bosses to accomplish unique missions and make your way through dangerous dungeons, cities and labyrinths full of traps. Don’t forget to collect ancient treasures along the way.

Might & Magic X: Legacy is an authentic solo experience in the classic first-person RPG genre. It offers a great example of how to update old-fashioned RPG mechanics for the present day with both the unique core formula and a new set of improved and fine-tuned features. The best RPG of its class!

Requesting Allkeyshop to please update your listings for Might & Magic X-Legacy, & add G2A’s Steam Gift auction page for this game, which by the way is as under (for 12.99 Euros):