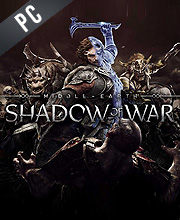 What is Middle-Earth Shadow of War CD key?

It's a digital key that allows you to download Middle-Earth Shadow of War directly to PC from the official Platforms.

How can I find the best prices for Middle-Earth Shadow of War CD keys?

Allkeyshop.com compares the cheapest prices of Middle-Earth Shadow of War on the digital downloads market to find the best sales and discount codes on trusted stores.

Continuing from the storyline of Shadow of Mordor, you will play as the human Talion. Talion is blessed with combat abilities that is like that of a ranger with the addition of special abilities because the elf Lord Celebrimbor shares the same body. You are out to confront the Dark Lord Sauron and his Ringwraiths and dominate Mordor from within.

The game offers a huge open world and is played in a third-person perspective. The Shadow of Mordor’s Nemesis System is also present making a unique and personal game experience. If Shadow of Mordor is considered more of a hack and slash game, Shadow of War is more of an action role playing game giving its players a compelling story.

Middle Earth Shadow of War is one adventure that you wouldn’t want to miss!

Just bought it took them 20 sec to send me code. Excited to play.

For the contnent/price rateo is truly a well-done game all around and after finishing it i can only say that Talion has and will leave a mark not only in the story, but also in yourselves. Just a personal preference, i liked more the atmosphere of the first one.

Maybe a little bit repetitive game, but still really fun and cheap. If you enjoyed the first one, you going to enjoy this one.

If you liked the Shadow Of Mordor, then you must buy this one!