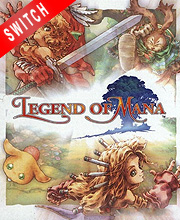 What is Legend of Mana Game Code?

It's a digital key that allows you to download Legend of Mana directly to Nintendo Switch directly from Nintendo eShop.

How can I find the best prices for Legend of Mana on Nintendo Switch ?

Allkeyshop.com compares the cheapest prices of Legend of Mana on the digital downloads market to find the best sales and discount codes on trusted stores.

Get to explore the vast world of Fa’Diel once again with the game’s HD remaster. Go on a journey to look for the mystical Mana Tree that has only been seen in a dream. The world map may seem empty, you must look for special artifacts to bring the towns, dungeons, and everything on the map to life.

Thoroughly enjoyed my trip to PlayStation Mana past, even with a handful of antiquated ideas and nagging frustrations. Legend of Mana is a game I would recommend to anyone hankering for an RPG that’s a little off the beaten path. And even if you just wish this was a bread-and-butter Mana adventure, we can all appreciate the incredible soundtrack.

This Legend of Mana remasters features beautiful visuals, amazing music from Yoko Shimomura, and a lot of quirky old-school weirdness. Mileage will vary with its over-designed mechanics, but the game is charming, unique in its storytelling, and offers some solid quality-of-life additions.

ASIAN BOX GAME : This is an Asian import of Legend of Mana Nintendo Switch in Box Edition (DVD-CD ROM). This is not a downloadable product. Please read the sellers page for any additional costs (taxes, shipping), delivery time for your country and languages available.
Standard Edition