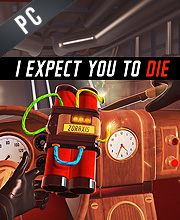 What is I Expect You To Die VR CD key?

It's a digital key that allows you to download I Expect You To Die VR directly to PC from the official Platforms.

How can I find the best prices for I Expect You To Die VR CD keys?

Allkeyshop.com compares the cheapest prices of I Expect You To Die VR on the digital downloads market to find the best sales and discount codes on trusted stores.

I Expect You To Die is another Virtual Reality puzzle game where you can have your most fun in a VR experience! Reinvent the way you see VR puzzle games in this game and find out that you have an endless supply of not just mind-boggling puzzles but also brain-twisting mysteries!

I Expect You to Die provides everything I want in VR room escape type of game. Objects are easy to manipulate, the puzzles don’t require great leaps of non-intuitive logic to solve, and the experience itself is quite entertaining. It can look spendy at full price, but it’s on Steam so it’ just a matter of waiting for a sale.

Depending on how skilled you are with puzzle solving (and how good you are with your hands if you’re using the Touch), I Expect You To Die could last you several hours or a few days. But what I can really get down with is that even after I had finished the handful of scenarios, I anxiously wanted to see how others would approach the same concepts, and tried out a few new tactics of my own.

Through well designed puzzles, intense escape room scenarios, and a kineticism absent in video games on standard screens, I Expect You to Die knows exactly how to leverage the magic of VR, and proves it almost every step of the way.

EUROPEAN STEAM GIFT : It’s a steam gift for Europe which requires an European IP address to activate and to play I Expect You To Die VR on Steam. Read carefully the store description about region and language restrictions.
STEAM CD KEY : Use the Steam Key Code on Steam Platform to download and play I Expect You To Die VR. You must login to your Steam Account or create one for free. Download the (Steam Client HERE). Then once you login, click Add a Game (located in the bottom Left corner) -> Activate a Product on Steam. There type in your CD Key and the game will be activated and added to your Steam account game library.
Standard Edition
Compare Choose & Buy Download (710)