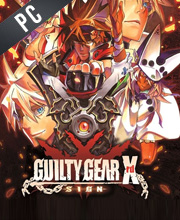 It's a digital key that allows you to download Guilty Gear Xrd-Sign directly to PC from the official Platforms.

How can I find the best prices for Guilty Gear Xrd-Sign CD keys?

Allkeyshop.com compares the cheapest prices of Guilty Gear Xrd-Sign on the digital downloads market to find the best sales and discount codes on trusted stores.

The game is the newest addition of the “Guilty Gear” series. Coming from the legacy of Guilty Gear from 1998, everything now has been redone in full 3D and in top quality hand-drawn anime effect. In addition to that, you will also experience a revamped battle system.

The game has five modes namely the tutorial mode, gallery mode, M.O.M mode, story mode and network mode. The Tutorial Mode will help you in learning how the fighting game works, it is a fun learning experience because Sin and Sol makes it very entertaining. The Gallery Mode will have you unlocking BGM’s and Illustrations.

The M.O.M Mode is crazy fun since you can customize your characters, adding different moves from other characters in the game. The Story Mode lets you learn about each characters’ story and combines the standard Adventure games with TV animation. Network Mode will let you interact with the global players by posting your Ranking Scores, this will let you play in either “Rank Match” or “Player Match”. Or if you would just want to watch, go to the player Match room and watch!

You can get to choose from 17 amazing characters both from the old and new Guilty Gear series. Speaking of something new, a new system called the ‘Roman Cancel’ where you are able to craft your own battle strategy will also be available.

This is one game that you will really love, the fighting is absolutely exhilarating.

EU STEAM CD KEY: Requires an EUROPEAN IP address or you must activate it with a VPN (Virtual Private Network) in order to play Guilty Gear Xrd-Sign. Might have languages restrictions or language packs. Read the description on the store game page to know if the EU IP is only needed for activation or for playing also (maybe on EU Servers). Most of the stores offer you their help, or show you how to do this with a tutorial to follow.
EUROPEAN STEAM GIFT : It’s a steam gift for Europe which requires an European IP address to activate and to play Guilty Gear Xrd-Sign on Steam. Read carefully the store description about region and language restrictions.
STEAM GIFT : A Steam gift is a one-time transfer you receive. You activate and install Guilty Gear Xrd-Sign to play on Steam, it is a non-refundable game that stays in your Steam games collection. Please read the store description about any language or region restrictions.
STEAM CD KEY : Use the Steam Key Code on Steam Platform to download and play Guilty Gear Xrd-Sign. You must login to your Steam Account or create one for free. Download the (Steam Client HERE). Then once you login, click Add a Game (located in the bottom Left corner) -> Activate a Product on Steam. There type in your CD Key and the game will be activated and added to your Steam account game library.
STEAM KEY ROW : It means for Rest Of the World countries which are not concerned by the region restrictions. This product can't be purchased and activated in Several countries. Please read the store description to know the full list of countries which are concerned. Use the key to Download and play Guilty Gear Xrd-Sign on Steam.
Bundle
Complete Edition
Standard Edition

Hi, this game’s price is 18.33 Euro according to your website. But when i click the link, it’s 27.45 Euro. Is there something i miss. Do you have a ‘Price Guarantee” policies ?
Thank you !

Thank you for your report. We will update the price. 🙂