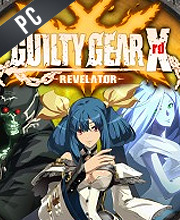 It's a digital key that allows you to download GUILTY GEAR Xrd REVELATOR directly to PC from the official Platforms.

How can I find the best prices for GUILTY GEAR Xrd REVELATOR CD keys?

Allkeyshop.com compares the cheapest prices of GUILTY GEAR Xrd REVELATOR on the digital downloads market to find the best sales and discount codes on trusted stores.

GUILTY GEAR Xrd -REVELATOR– is an action video game that is developed and published by Arc System Works.

Another addition to the guilty gear series is here! Offering a revolutionary 3D cell animation graphics that has been further refined with the addition of new game contents.

Now with a cast of 23 characters. 6 of which came from the previous series – Johnny, Jack-O, Kuradoberi Jam, Kum Haehyun, Raven, and Dizzy.

Game modes are extensive starting with the Tutorial Mode, a step by step guide for beginners; the Styligh Mode allowing easy inputs for special attacks; the Combo Mode teaching the combo potential of each character; the Mission Mode which is all about the character’s general tactics and techniques; the Training Mode which allows players to recreate situations so that they could train and research; and of course the Story Mode allowing players to explore the lore in full cinematic 3D; an Online Mode is also available where players can have ranked matches with other players online.

EU STEAM CD KEY: Requires an EUROPEAN IP address or you must activate it with a VPN (Virtual Private Network) in order to play GUILTY GEAR Xrd REVELATOR. Might have languages restrictions or language packs. Read the description on the store game page to know if the EU IP is only needed for activation or for playing also (maybe on EU Servers). Most of the stores offer you their help, or show you how to do this with a tutorial to follow.
EUROPEAN STEAM GIFT : It’s a steam gift for Europe which requires an European IP address to activate and to play GUILTY GEAR Xrd REVELATOR on Steam. Read carefully the store description about region and language restrictions.
STEAM GIFT : A Steam gift is a one-time transfer you receive. You activate and install GUILTY GEAR Xrd REVELATOR to play on Steam, it is a non-refundable game that stays in your Steam games collection. Please read the store description about any language or region restrictions.
STEAM CD KEY : Use the Steam Key Code on Steam Platform to download and play GUILTY GEAR Xrd REVELATOR. You must login to your Steam Account or create one for free. Download the (Steam Client HERE). Then once you login, click Add a Game (located in the bottom Left corner) -> Activate a Product on Steam. There type in your CD Key and the game will be activated and added to your Steam account game library.
Bundle
Complete Edition
Deluxe Edition
Deluxe + DLC
Standard Edition