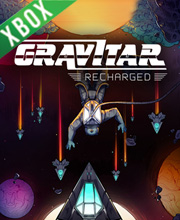 What is Gravitar Recharged Game Code?

It's a digital key that allows you to download Gravitar Recharged directly to Xbox One from Xbox Live.

How can I find the best prices for Gravitar Recharged on Xbox one?

Allkeyshop.com compares the cheapest prices of Gravitar Recharged on the digital downloads market to find the best sales and discount codes on trusted stores.

Gravitar: Recharged is an arcade shoot-em-up game where you play as a lone pilot, far from home, navigating an abstract universe of uncharted planets and space stations guarded by mysterious hostile aliens trying to get back home. Complete missions in each solar system, by exploring planets and points of interest trying to survive a variety of challenging environments, with varying levels of gravity that will test your skills as a pilot. Once you finish all of a solar systems level you will be transported to the next one through a massive black hole.