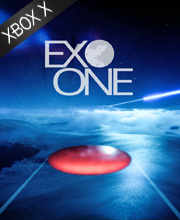 Exo One is not only a visually impressive achievement. It also uses haunting music and realistic environmental sounds to transport the player into its strange worlds. Handling of the craft is unusual but works very well once you get the hang of it. The story is not blatantly spelled out to the player but that adds to the mystery and allure of what you are trying to do and the ending ties everything up nicely.

XBOX SERIES GAME CODE : Use the Digital Code received by mail in your Xbox account to download Exo One Xbox Series from the Xbox Live. Internet connection and a Xbox Series are required. Please read the store description about any language or region restrictions.
Standard Edition