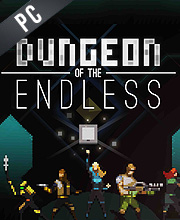 What is Dungeon of the Endless CD key?

It's a digital key that allows you to download Dungeon of the Endless directly to PC from the official Platforms.

How can I find the best prices for Dungeon of the Endless CD keys?

Allkeyshop.com compares the cheapest prices of Dungeon of the Endless on the digital downloads market to find the best sales and discount codes on trusted stores.

Dungeon of the Endless is a rogue-like dungeon defense/adventure/strategy game developed and published by AMPLITUDE Studios.

This is a co-op multiplayer game which allows up to four players to play as a team. The objective of the game is to have the player and his team protect the generator of their crashed ship while exploring an unknown dungeon while facing waves of monsters and other obstacles as they find their way out.

The game tells the story of condemned criminals who were given a chance to earn back their places in society by agreeing to colonize an unexplored planet called the Auriga Prime. As their ship called “Success” arrives on the planet, its well cloaked defense system, turned the ship into chunks of metal and fell toward the planet. The surviving prisoners find themselves alive and alone in an unfamiliar world, and they realized that they had crashed into some sort of a dungeon-facility.

In order for them to make it out alive, you must form a team of heroes, each of them having their own strengths. Equip them with weapons, deploy them, and make them earn powerful abilities! Build up your defenses using resources available inside the dungeon. Open doors and discover an infinite number of levels and layouts. Do everything you can and prepare yourselves to escape!

EU STEAM CD KEY: Requires an EUROPEAN IP address or you must activate it with a VPN (Virtual Private Network) in order to play Dungeon of the Endless. Might have languages restrictions or language packs. Read the description on the store game page to know if the EU IP is only needed for activation or for playing also (maybe on EU Servers). Most of the stores offer you their help, or show you how to do this with a tutorial to follow.
STEAM CD KEY : Use the Steam Key Code on Steam Platform to download and play Dungeon of the Endless. You must login to your Steam Account or create one for free. Download the (Steam Client HERE). Then once you login, click Add a Game (located in the bottom Left corner) -> Activate a Product on Steam. There type in your CD Key and the game will be activated and added to your Steam account game library.
STEAM KEY ROW : It means for Rest Of the World countries which are not concerned by the region restrictions. This product can't be purchased and activated in Several countries. Please read the store description to know the full list of countries which are concerned. Use the key to Download and play Dungeon of the Endless on Steam.
Windows 10 Global : This is an Worldwide Microsoft code to play on PC for Worldwide . You need to have installed Windows 10 Anniversary Edition update on your PC. Log into your Microsoft account to download and play. Read closely the description given by the store to activate your game.
Collection
Crystal Edition
Definitive Edition
Pixel Edition
Standard Edition
Compare Choose & Buy Download (710)

Excellent price today for this nice game, worth buying it now!