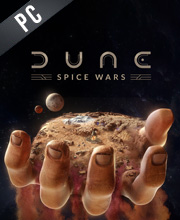 It's a digital key that allows you to download Dune Spice Wars directly to PC from the official Platforms.

How can I find the best prices for Dune Spice Wars CD keys?

Allkeyshop.com compares the cheapest prices of Dune Spice Wars on the digital downloads market to find the best sales and discount codes on trusted stores.

Dune: Spice Wars is a unique blend of 4X and real-time strategy game from the critically acclaimed developers of Northgard Shiro Games, set in Frank Herbert’s Dune universe you must lead your chosen faction and battle for control and dominance over the spice and the harsh desert planet of Arrakis itself. In Dune Spice is the most valuable resource in the universe it extends life, expands consciousness, and makes interstellar travel possible but as important as it is it’s only found on one planet in the universe, Arrakis. It is sought by about every influential power in the universe, he who controls the spice control’s the Universe!

With a haunting soundtrack, great sound effects, a great visual style that stands out from the crowd, excellent commanding gameplay, and the plethora of options that you’ll be able to take to achieve victory, you’ll find yourself excited to try to take command of the Spice, even if you end suffering a crushing loss.

Dune: Spice Wars is a layered, clever, generally well-balanced RTS with great faction diversity that feels more or less finished even in its current early state.

EU STEAM CD KEY: Requires an EUROPEAN IP address or you must activate it with a VPN (Virtual Private Network) in order to play Dune Spice Wars. Might have languages restrictions or language packs. Read the description on the store game page to know if the EU IP is only needed for activation or for playing also (maybe on EU Servers). Most of the stores offer you their help, or show you how to do this with a tutorial to follow.
EUROPEAN STEAM GIFT : It’s a steam gift for Europe which requires an European IP address to activate and to play Dune Spice Wars on Steam. Read carefully the store description about region and language restrictions.
STEAM GIFT : A Steam gift is a one-time transfer you receive. You activate and install Dune Spice Wars to play on Steam, it is a non-refundable game that stays in your Steam games collection. Please read the store description about any language or region restrictions.
STEAM CD KEY : Use the Steam Key Code on Steam Platform to download and play Dune Spice Wars. You must login to your Steam Account or create one for free. Download the (Steam Client HERE). Then once you login, click Add a Game (located in the bottom Left corner) -> Activate a Product on Steam. There type in your CD Key and the game will be activated and added to your Steam account game library.
Early Access
Compare Choose & Buy Download (710)