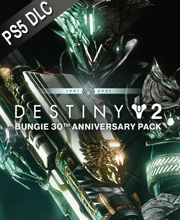 It's a digital key that allows you to download Destiny 2 Bungie 30th Anniversary Pack directly to Playstation 5 from PSN (PlayStation Network).

How can I find the best prices for Destiny 2 Bungie 30th Anniversary Pack on Playstation 5 ?