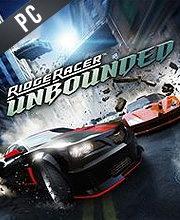 It's a digital key that allows you to download Ridge Racer Unbounded directly to PC from the official Platforms.

How can I find the best prices for Ridge Racer Unbounded CD keys?

Allkeyshop.com compares the cheapest prices of Ridge Racer Unbounded on the digital downloads market to find the best sales and discount codes on trusted stores.

Ridge Racer Unbounded is a racing game developed by BUGBEAR and published by BANDAI NAMCO Entertainment. It is part of the long-running Ridge Racer franchise. The game is set in a fictional location, a city named Shatter Bay.

There, racers gather and compete in street races without any rules. Racers compete for money as well as superiority in fast-paced races done through the streets within the city, dodging traffic and tearing through obstacles that are in their way. A mysterious team of racers led by a Japanese master plays a major role in the races done throughout Shatter Bay.

Put your superb driving skills to the test in Ridge Racer Unbounded‘s amazing features. With cutting edge physics end effects combined, you can go ahead and crash through everything and bring destruction to the city.

Unleash the rage within you and remove everything in our way and make your own path! With no ruules included in every race, get to drive in urban environments and rampage your way through many areas. With dozens of badass street racing machines included in the game, you get to prove your worth, get respect, and expand your turf.

EU STEAM CD KEY: Requires an EUROPEAN IP address or you must activate it with a VPN (Virtual Private Network) in order to play Ridge Racer Unbounded. Might have languages restrictions or language packs. Read the description on the store game page to know if the EU IP is only needed for activation or for playing also (maybe on EU Servers). Most of the stores offer you their help, or show you how to do this with a tutorial to follow.
STEAM CD KEY : Use the Steam Key Code on Steam Platform to download and play Ridge Racer Unbounded. You must login to your Steam Account or create one for free. Download the (Steam Client HERE). Then once you login, click Add a Game (located in the bottom Left corner) -> Activate a Product on Steam. There type in your CD Key and the game will be activated and added to your Steam account game library.
STEAM KEY ROW : It means for Rest Of the World countries which are not concerned by the region restrictions. This product can't be purchased and activated in Several countries. Please read the store description to know the full list of countries which are concerned. Use the key to Download and play Ridge Racer Unbounded on Steam.
Bundle
Complete Pack
Extended Edition
Limited Edition
Standard Edition