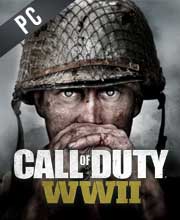 What is Call of Duty WW2 CD key?

It's a digital key that allows you to download Call of Duty WW2 directly to PC from the official Platforms.

How can I find the best prices for Call of Duty WW2 CD keys?

Allkeyshop.com compares the cheapest prices of Call of Duty WW2 on the digital downloads market to find the best sales and discount codes on trusted stores.

Call of Duty: WWII is a first-person shooter video game developed by Sledgehammer Games and published by Activision. This game is the fourteenth primary installment of the series.

The game focuses on World War II specifically from the year 1944-1945 in the “European theater of conflict.” This is the period where the allied forces are planning to march into Germany. The game’s campaign will focus on France, Germany, and Belgium.

Call of Duty: WWII gameplay offers a Campaign mode, Multiplayer mode, and Zombie mode. The campaign mode will no longer have the health regeneration and some resources will be lacking in this mode as well. This mode won’t have a difficulty setting anymore since it is in automatic ‘Hard Mode’ already. The multiplayer mode will have a new headquarters social space, war mode, divisions, as well as the return of the “boots-on-the-ground” gameplay. The Zombie mode or Nazi Zombie mode will have an original storyline as well as a zombie cooperative game mode. And everything here is also set in World War II.

Call of Duty WWII gives its players a new take on WWII as well as offers a breathtakingly new experience.

Uncut : Uncensored version; unavailable in some countries. Please refer to the seller’s website.

EU STEAM CD KEY: Requires an EUROPEAN IP address or you must activate it with a VPN (Virtual Private Network) in order to play Call of Duty WW2. Might have languages restrictions or language packs. Read the description on the store game page to know if the EU IP is only needed for activation or for playing also (maybe on EU Servers). Most of the stores offer you their help, or show you how to do this with a tutorial to follow.
EUROPEAN STEAM GIFT : It’s a steam gift for Europe which requires an European IP address to activate and to play Call of Duty WW2 on Steam. Read carefully the store description about region and language restrictions.
STEAM CD KEY : Use the Steam Key Code on Steam Platform to download and play Call of Duty WW2. You must login to your Steam Account or create one for free. Download the (Steam Client HERE). Then once you login, click Add a Game (located in the bottom Left corner) -> Activate a Product on Steam. There type in your CD Key and the game will be activated and added to your Steam account game library.
STEAM KEY ROW : It means for Rest Of the World countries which are not concerned by the region restrictions. This product can't be purchased and activated in Several countries. Please read the store description to know the full list of countries which are concerned. Use the key to Download and play Call of Duty WW2 on Steam.
Deluxe Edition
Franchise Collection
Standard Edition
Uncut Edition

The link you requested can only be found at our US website, https://cheapdigitaldownload.com/call-of-duty-ww2-digital-download-price-comparison/.

If you have any other concerns, please send us a message at support@allkeyshop.com.

Nice campaign and multiplayer, but zombie mode is one of the best in Call of Duty series. Good to play with friends!

veri nice, has many nooks, the gameplay is still the same as COD: you shoot, you take cover, you avoid dying, you have no respite.