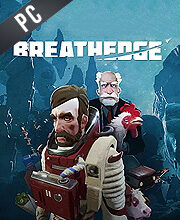 What is Breathedge CD key?

It's a digital key that allows you to download Breathedge directly to PC from the official Platforms.

How can I find the best prices for Breathedge CD keys?

Allkeyshop.com compares the cheapest prices of Breathedge on the digital downloads market to find the best sales and discount codes on trusted stores.

Your spaceship suddenly crashes and you are stuck in outer space along with your chicken who happens to be immortal. You have to craft things that you would need to survive, pilot other smaller vehicles and control space stations. Get to find out why your spaceship crashed in the first place.

Breathedge 1.0 is a fun, humorous free-form float through space. There’s not a lot to complain about here as the game does the survival/collecting game genre proud. Wrap this up with some humorous storytelling that would make Deadpool proud and you have a bonafide winner!

It’s not very helpful at the start, and at times the comedy falls flat. But stick with Breathedge and there’s a surprisingly deep mechanic entwined with a Schafer-esque story adventure.

EPIC GAMES KEY : Region Free / Worldwide. Requires Epic Games Launcher App in order to play the game. You need to create a free account here in order to download Breathedge from Epic Plateform . Read the description on the store page about any language or country restrictions.
GOG.COM CD KEY : You need to register on Gog.com, then use the GOG Key to download and activate your game to play Breathedge.
ORIGIN CD KEY : Use the Origin Key Code (Electronic Arts - EA) on Origin Platform to download and play Breathedge. You have to login to your Origin Account or create one for free. Download and install the Origin Software HERE) then you can activate the game on it. Once installed, start Origin, click on the Origin Tab and click on Redeem Product Code and just enter the key. The game will appear in your My games list.
EU STEAM CD KEY: Requires an EUROPEAN IP address or you must activate it with a VPN (Virtual Private Network) in order to play Breathedge. Might have languages restrictions or language packs. Read the description on the store game page to know if the EU IP is only needed for activation or for playing also (maybe on EU Servers). Most of the stores offer you their help, or show you how to do this with a tutorial to follow.
EUROPEAN STEAM GIFT : It’s a steam gift for Europe which requires an European IP address to activate and to play Breathedge on Steam. Read carefully the store description about region and language restrictions.
STEAM GIFT : A Steam gift is a one-time transfer you receive. You activate and install Breathedge to play on Steam, it is a non-refundable game that stays in your Steam games collection. Please read the store description about any language or region restrictions.
STEAM CD KEY : Use the Steam Key Code on Steam Platform to download and play Breathedge. You must login to your Steam Account or create one for free. Download the (Steam Client HERE). Then once you login, click Add a Game (located in the bottom Left corner) -> Activate a Product on Steam. There type in your CD Key and the game will be activated and added to your Steam account game library.
Standard Edition

Episode 2-3 are releasing soon and the game price will go up, now it time to get that fantastic space sim. Great Humor too