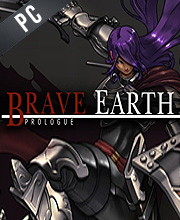 It's a digital key that allows you to download Brave Earth Prologue directly to PC from the official Platforms.

How can I find the best prices for Brave Earth Prologue CD keys?

Allkeyshop.com compares the cheapest prices of Brave Earth Prologue on the digital downloads market to find the best sales and discount codes on trusted stores.

Play in a challenging and engaging action platformer that is inspired by classics like Castlevania and Ninja Gaiden. The game’s story spans across three characters all with their own paths and playstyles.

Naomi vos Cruz is a knight who is just starting out. She was sent to do a regular courier job that ended up with her trying to put a stop to a demonic ritual. The other character is Naomi’s best friend named Sinlen Rothschild, she is a powerful mage that is able to defend herself with different kinds of long-range magic. The third character is Naomi’s older brother Trevor vos Cruz who is the Master Hunter of the Church. He may be slow in attacks because of his huge sword but he is quick to evade though.

A lot of lore to discover as well as great soundtrack to listen to from Necrophageon with additional tracks by Sk Ultra.