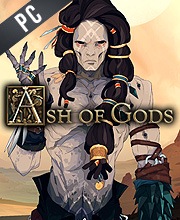 What is Ash Of Gods Redemption CD key?

It's a digital key that allows you to download Ash Of Gods Redemption directly to PC from the official Platforms.

How can I find the best prices for Ash Of Gods Redemption CD keys?

Allkeyshop.com compares the cheapest prices of Ash Of Gods Redemption on the digital downloads market to find the best sales and discount codes on trusted stores.

Ash of Gods: Redemption is an adventure, strategy, role-playing video game that was developed by AurumDust and published by AurumDust in cooperation with WisperGames.

Get to play the story of three separate protagonists: Captain Thorn Brenin, bodyguard Lo Pheng, the scribe Hopper Rouly and more. A menace is on the rise with plans of awakening the sleeping gods by drowning the world in blood.

The game’s storyline is constantly evolving due to the choices that the players make. When a character dies the game will still go on creating a story around the events that happened. Get to gather cards that would unleash powerful abilities.

What’s even amazing is that the game’s AI is able to adapt to your playstyle which will ensure the consistency of having a challenging experience in the game.

A player versus player multiplayer is available that lets you challenge others for a spot on the leaderboards. Being a risk taker in the game will be much more rewarding than taking the easier route.

GOG.COM CD KEY : You need to register on Gog.com, then use the GOG Key to download and activate your game to play Ash Of Gods Redemption.
EU STEAM CD KEY: Requires an EUROPEAN IP address or you must activate it with a VPN (Virtual Private Network) in order to play Ash Of Gods Redemption. Might have languages restrictions or language packs. Read the description on the store game page to know if the EU IP is only needed for activation or for playing also (maybe on EU Servers). Most of the stores offer you their help, or show you how to do this with a tutorial to follow.
EUROPEAN STEAM GIFT : It’s a steam gift for Europe which requires an European IP address to activate and to play Ash Of Gods Redemption on Steam. Read carefully the store description about region and language restrictions.
STEAM CD KEY : Use the Steam Key Code on Steam Platform to download and play Ash Of Gods Redemption. You must login to your Steam Account or create one for free. Download the (Steam Client HERE). Then once you login, click Add a Game (located in the bottom Left corner) -> Activate a Product on Steam. There type in your CD Key and the game will be activated and added to your Steam account game library.
Deluxe Edition
Standard Edition