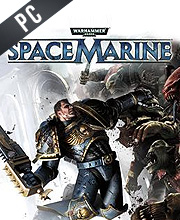 It's a digital key that allows you to download Warhammer 40 000 Space Marine directly to PC from the official Platforms.

How can I find the best prices for Warhammer 40 000 Space Marine CD keys?

Allkeyshop.com compares the cheapest prices of Warhammer 40 000 Space Marine on the digital downloads market to find the best sales and discount codes on trusted stores.

The game takes the traditional 3rd person shooter genre and adds a new depth of visceral melee combat to deliver an experience like no other. Players will get to unleash an arsenal of devastating weaponry against their foes. Unlock new weapons, upgrades, armor and abilities through an accessible progression system. This devastating weaponry empowers players to deliver bone crushing violence and decapitate their enemies.

This game is amazing, graphics are stupendous and brilliant, the plot for the campaign is great, and you get to choose your own play style. Not only that, you can form your own Space Marine squad or Chaos Space Marine warband and face off in 8 vs 8 online matches. Gain experience and skill while unlocking new weapons and armor to customize your classes. It is a solid action game that is totally worth every cent!

Zoom 1m 3m 1y All
Track product
GOG.COM CD KEY : You need to register on Gog.com, then use the GOG Key to download and activate your game to play Warhammer 40 000 Space Marine.
EU STEAM CD KEY: Requires an EUROPEAN IP address or you must activate it with a VPN (Virtual Private Network) in order to play Warhammer 40 000 Space Marine. Might have languages restrictions or language packs. Read the description on the store game page to know if the EU IP is only needed for activation or for playing also (maybe on EU Servers). Most of the stores offer you their help, or show you how to do this with a tutorial to follow.
STEAM GIFT : A Steam gift is a one-time transfer you receive. You activate and install Warhammer 40 000 Space Marine to play on Steam, it is a non-refundable game that stays in your Steam games collection. Please read the store description about any language or region restrictions.
STEAM CD KEY : Use the Steam Key Code on Steam Platform to download and play Warhammer 40 000 Space Marine. You must login to your Steam Account or create one for free. Download the (Steam Client HERE). Then once you login, click Add a Game (located in the bottom Left corner) -> Activate a Product on Steam. There type in your CD Key and the game will be activated and added to your Steam account game library.
STEAM KEY ROW : It means for Rest Of the World countries which are not concerned by the region restrictions. This product can't be purchased and activated in Several countries. Please read the store description to know the full list of countries which are concerned. Use the key to Download and play Warhammer 40 000 Space Marine on Steam.
Anniversary Edition
Collection
Complete Edition
DLC Pack
Franchise Collection
Standard Edition
Ultimate Collection
Compare Choose & Buy Download (772)