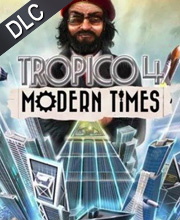 It's a digital key that allows you to download Tropico 4 Modern times directly to PC from the official Platforms.

How can I find the best prices for Tropico 4 Modern times CD keys?

Allkeyshop.com compares the cheapest prices of Tropico 4 Modern times on the digital downloads market to find the best sales and discount codes on trusted stores.

Tropico 4 is a construction and management simulation video game, which focuses on a city-building simulation. Like the first and third games in the series, it centers on a customizable main character titled “El Presidente” – the dictator who runs the island banana republic.

As El Presidente, the player can see in every citizen’s needs, happiness, skills, thoughts and political ideology. The demands of Tropicans include food, health, leisure, and faith. These are fulfilled by constructing specific buildings: If the citizens demand leisure the player must try to build a pub, restaurant, movie theater, or some other form of entertainment.

Tropico 4: Modern Times is an expansion pack that features a new single-player campaign which takes place a year after the events of Tropico 4.

After El Presidente’s success in rebuilding Tropico, he leaves on a well deserved vacation, only to find when he returns that his lackey Penultimo has predictably been running the entire nation into the ground amid the 2008 economic crisis.

While working to put the country back on track, El Presidente crosses paths with the elusive shadow organization “The Conclave,” and it’s up to him to help save the world again while lining his pockets.

PUBLISHER WEBSITE CD KEY: Use the CD Key Code to download directly on the Official Website or from the store to play Tropico 4 Modern times. Follow the instructions given by the store. Verify languages available and possible region restrictions before buying.
EU STEAM CD KEY: Requires an EUROPEAN IP address or you must activate it with a VPN (Virtual Private Network) in order to play Tropico 4 Modern times. Might have languages restrictions or language packs. Read the description on the store game page to know if the EU IP is only needed for activation or for playing also (maybe on EU Servers). Most of the stores offer you their help, or show you how to do this with a tutorial to follow.
STEAM GIFT : A Steam gift is a one-time transfer you receive. You activate and install Tropico 4 Modern times to play on Steam, it is a non-refundable game that stays in your Steam games collection. Please read the store description about any language or region restrictions.
STEAM CD KEY : Use the Steam Key Code on Steam Platform to download and play Tropico 4 Modern times. You must login to your Steam Account or create one for free. Download the (Steam Client HERE). Then once you login, click Add a Game (located in the bottom Left corner) -> Activate a Product on Steam. There type in your CD Key and the game will be activated and added to your Steam account game library.
Bundle
Collectors Bundle Edition
DLC
DLC Pack

unique game .. nothing similar to what you are used to.. worth buying on discount