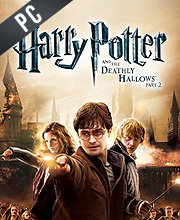 It's a digital key that allows you to download Harry Potter Deathly Hallows 2 directly to PC from the official Platforms.

How can I find the best prices for Harry Potter Deathly Hallows 2 CD keys?

Allkeyshop.com compares the cheapest prices of Harry Potter Deathly Hallows 2 on the digital downloads market to find the best sales and discount codes on trusted stores.

Experience Hogwarts as you’ve never seen it before as you explore the mysterious and dark past behind it. Deathly Hallows 2 features a great fantasy theme and spell-casting. It is a shooter in the grand tradition of Gears of War and so many others – you aim and shoot with your wand just as you would with a gun, and you can take cover and travel between covers just as you would in most modern third-person shooters.

The game also features multiple spells which you can manage in order to maximize your offensive capacity. Some spells need to recharge after a single use, while others have a cumulative need to recharge.

When graphical aesthetics, thrilling atmosphere and a cinematic soundtrack celebrate their union, you will have the time of your life. Wield the power of a true wizard as you duel the most fearsome and formidable characters of the wizarding world in Harry Potter and the Deathly Hallows 2!

ORIGIN CD KEY : Use the Origin Key Code (Electronic Arts - EA) on Origin Platform to download and play Harry Potter Deathly Hallows 2. You have to login to your Origin Account or create one for free. Download and install the Origin Software HERE) then you can activate the game on it. Once installed, start Origin, click on the Origin Tab and click on Redeem Product Code and just enter the key. The game will appear in your My games list.
Standard Edition

The first two stores aren’t right. They link to Hearts of Iron IV and to HP 7.1 instead of 7.2.